The Zircon is a loudspeaker-microphone probe for measuring in situ the absorption and reflection properties of surfaces. These may be indoor surfaces, such as in concert halls and gyms, or outdoor surfaces, such as road surfaces (ISO 13472-1), sound barriers installed in a free field (NF S 31-089) and traffic noise reducing devices (CEN/TS 1793-5).

The Zircon components are easy to dismantle and transport in their flight cases. 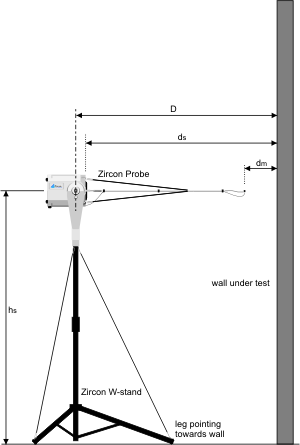 For wall measurements, a setup including the Zircon Probe and the Zircon W-stand is used. 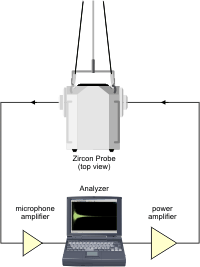 The Zircon is connected to an analyzer such as Dirac running on a notebook PC, with integrated sound device or external sound device such as the Triton, and using a power amplifier, such as the B&K Type 2734.

The analyzer generates an excitation signal, such as an MLS or sweep signal, which is fed to the loudspeaker. The microphone picks up the direct and reflected sound. From the sent and received signals, the analyzer calculates the impulse response. From the impulse response, a direct and a reflection part are extracted by windowing, subtraction and other techniques. By comparing these signal parts, the absorption and reflection properties of the surface under test are obtained.

The low end of the usable frequency range is determined by the (limited) length of the time windows. The direct sound time window cannot be made so long as to overlap the reflected response, whereas the reflected sound time window is limited by the tail of the direct response, and the parasitic reflections. Both windows can be extended by using the subtraction technique as described by E. Mommertz in 'Angle-dependent in-situ measurements of reflection coefficients using a subtraction technique' (Applied Acoustics, Vol.46, 1995, pp. 251-263).

For floor (e.g. road surface) measurements, a setup including the Zircon Probe and the Zircon F-stand is used. 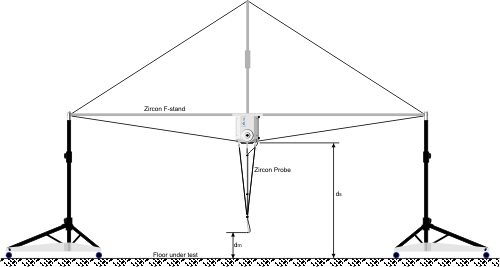 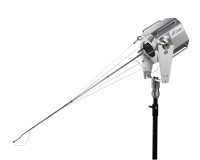 You can download the Zircon datasheet including all specifications as a pdf.

Each product or component can be ordered separately. For pricing and other ordering information, please contact us.